18 Tourists, 15 being veterans, and 3 being BurgerTour  virgins ventured to a Burgertour first, a chain restaurant, this location being at 3200 N. Sepulveda Blvd. in Manhattan Beach, in  a shopping center, no less.

Islands is a chain of 30 or so burger restaurants in Southern California.  The theme is the Pacific Islands, to be politically correct, but the emphasis is on Hawaii.  A hamburger, with lettuce, tomato, onion and blue cheese is not very Hawaiian, but then if they were to be authentic, there would only be pork, chicken, or fish, and not hamburger at all.

The advantage to the reader is that one can be reasonably certain that the ratings of meat, juice, bunnage, baggage, and mulletude, will be reasonably consistent from location to location, although the Kenny factor may vary widely.

The burgers were big, and more than enough, with a few shared cheese fries, for anyone who works in an office all day (and a choice of types of cheese, no less:  what could be more Hawaiian than fries with blue cheese?),.  Almost everyone ordered a burger, and nothing else, but we all shared some fries.  My postprandial survey of the plates when the tourists were done eating revealed that about half were licked clean, and half were not, leftovers were primarily bunnage, and some meat, and some baggage, and not because they were not tasty, see the ratings, but because there was a lot of food.

Should you wonder who these tourists are, as I did, it might help to think of those people you know who can go out for a hamburger, on a Wednesday night, and take two hours, plus travel time to do it.  The common factor is not occupation, nor education, nor ethnic background.  Common factors are being over 25, single, or, if not single, without small children.  And, a certain tolerance for the absurd helps.  Everyone there knew someone, but no one knew everyone.  Statistically it helps if your name is Eric or Ryan (there were two of each) – how likely is that with only 18 people, only 13 of whom were male?

As for mulletude, the décor is commercial Hawaiian, mass produced, but not offensive, and the patio where we ate was fine, temperature was good, air was good, seats were good, noise level was just fine.

As for the Kenny factor, the waiter was in sync with what was wanted, and as BurgerTourists arrived, and the regular customers left, let us assemble more and more tables until was room for all 18.  Ian was just fine.

For those who want an Alabama Slammer, however, to go with their burger, Islands does not stock Southern Comfort in the bar.

One tourist passed out invitations to her Halloween Party, even to people she didn’t know, I guess figuring that Burger Tourists are fun type people, and not likely to cause problems or wreck her dwelling – as I read the invitation you have to go dressed as a bridesmaid so it ought to be interesting.  Maybe it ought to be followed by a revisit to Hamburger Haven in West Hollywood, and see how many drag queens can get arrested at once.  (See review of Hamburger Haven.)

As you can see by the ratings, you can’t go wrong at an Islands, but you won’t impress any dates with your knowledge of the little known hamburger hideaways of LA. 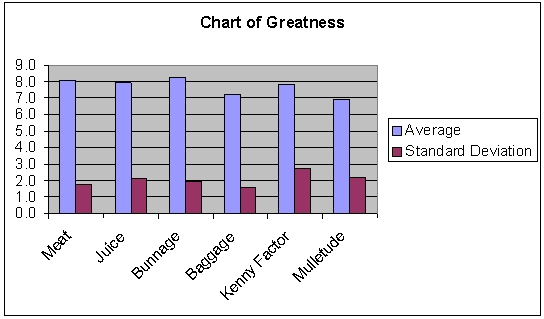